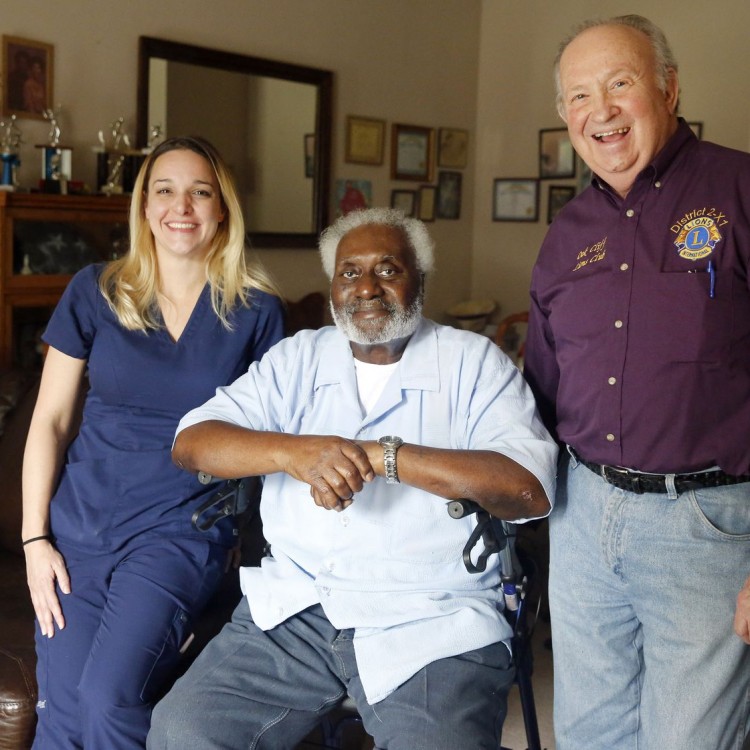 With so much discouraging — and superficial — news dominating the headlines, I jumped at the chance to talk to these seemingly ordinary people who represent the quiet heroics that happen all around us. 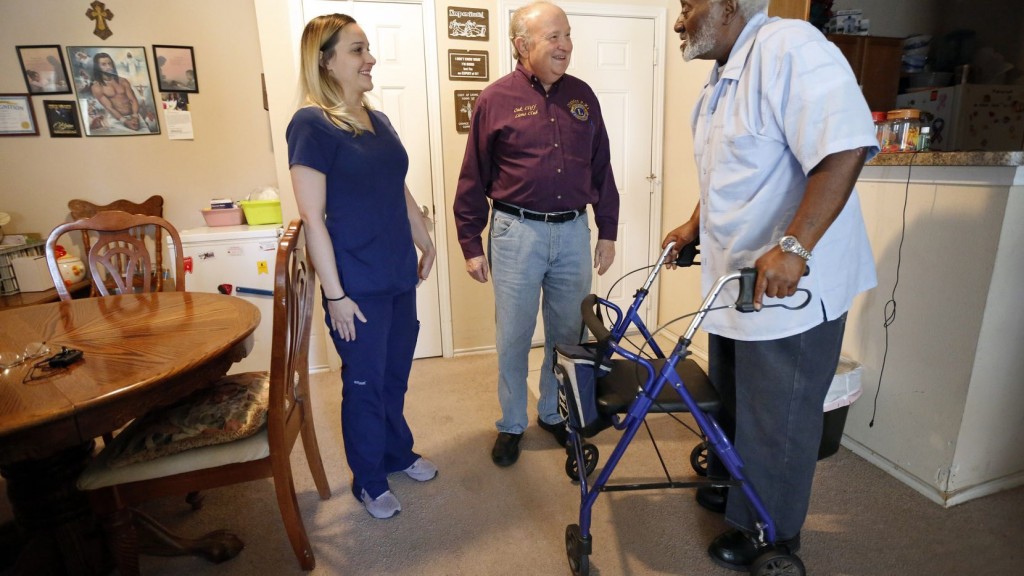 Charlie and Abby Tupper sensed that something wasn’t right moments after they knocked on George Kelley’s door at a senior-citizen apartment complex near Kiest Park.

The father and daughter’s insistence that their Meals on Wheels recipient answer their knock on the December day meant a lot more than lunch to the 74-year-old retiree on the other side of the door. Kelley, stuck helplessly between a coffee table and couch since falling two days earlier, had begun to give up hope before the Tuppers arrived.

“I think the Man up above sent them by to be extra concerned,” George Kelley told me Wednesday as he recalled the awful experience. “Brother Charlie and Abby saved my life. If it hadn’t been for Meals on Wheels coming by, there’s no telling how much longer I’d have laid there.”

“I think the Man up above sent them by to be extra concerned,” George Kelley told me Wednesday as he recalled the awful experience. “Brother Charlie and Abby saved my life. If it hadn’t been for Meals on Wheels coming by, there’s no telling how much longer I’d have laid there.”

With so much discouraging — and superficial — news dominating the headlines, I jumped at the chance to talk to these seemingly ordinary people who represent the quiet every-day heroics that too often go unnoticed.

The Visiting Nurse Association of Texas has long run Meals on Wheels in the county. Each weekday, the service provides nutritious food to homebound seniors and disabled adults who — because of illness, advanced age or disability — are unable to handle their own meals.

With one in six Dallas County seniors struggling with hunger, the service is a godsend. Meals on Wheels also helps many older folks stay in their own homes — which is not only what many of them prefer, but also a far less costly option than nursing homes.

About 4,500 clients hear that daily knock and the “Meals on Wheels” greeting. Volunteers do half the deliveries; the other half are made by paid drivers.

The food is important — but so is the connection to the outside world and the informal welfare check that the daily visits provide.

The older Tupper, who at 76 still practices law full time, has delivered meals for 15 years as part of the Oak Cliff Lions Club’s volunteer team. Daughter Abby, a registered nurse, works the route with him as often as possible.

Charlie Tupper knew Kelley was nearly always home at mealtime — or left a note with his whereabouts. But for the longest time, Tupper’s persistent knocking roused no one.

The back and forth between the two men went on for some time. Finally, Kelley instructed the Tuppers to leave the bag on the doorknob.

“Something was gnawing at our stomachs as we made the rest of our deliveries,” Abby recalled. “Once we were done, my dad said, ‘We need to go back and check on Mr. Kelley.’ ”

The bag was still there. Charlie Tupper demonstrated to me how he banged hard on the door and in a booming voice called out repeatedly, Mr. Kelley, are you sure you are all right?

After a few minutes, Kelley responded with the truth: Well, no, I’m stuck. I think I need help. 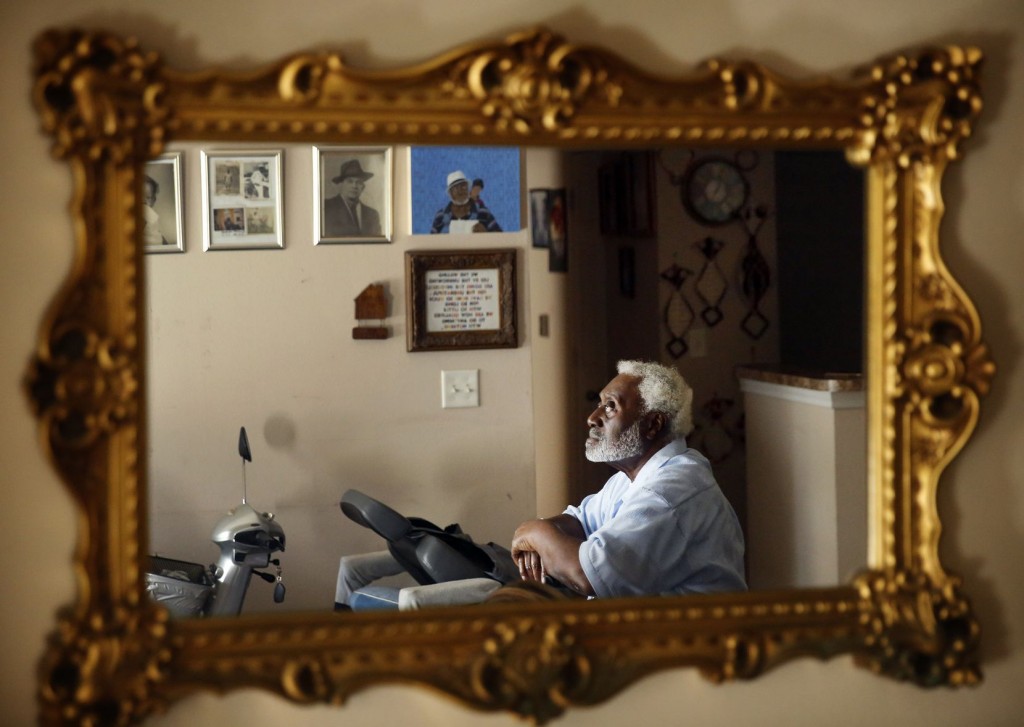 Meals on Wheels recipient George Kelley recounted his experience of being stranded for two days on the floor of his Oak Cliff apartment and his relief when Charlie Tupper and his daughter, Abby, came to his rescue through their Meals on Wheels work. (Tom Fox / Staff Photographer)

The Tuppers bolted to the manager’s office to report that something was badly wrong in Kelley’s apartment. They also called the VNA Meals on Wheels office, which keeps an emergency contact number for each client.

Kelley, a widower and retired machinist, has had his share of health issues, most recently with his kidney and bladder. Although he needs a walker or scooter to get around, he stays upbeat, enjoying domino games and people-watching through his large back windows.

That Saturday afternoon, Dec. 15, Kelley’s leg gave way as he got up from the couch and he went crashing down. His head and chest hit the floor and coffee table.

The impact knocked him unconscious for some time. Later, when he realized he couldn’t stand, he tried to wriggle forward on his forearms. “If I could get to my scooter, I could turn on the horn,” he said.

But nothing worked. His mind became increasingly disoriented and his body grew more and more numb. He said he just kept thinking, “How did I get on this floor?” and “How will I get off it?” Other times, “my mind was just a total blank.”

At first, his biggest frustration was that he couldn’t see the TV; he had fallen with his back to it. But as time passed — especially as he realized he was about to endure a second night on the floor — he was hungry, he hurt and he was long past needing to relieve himself. 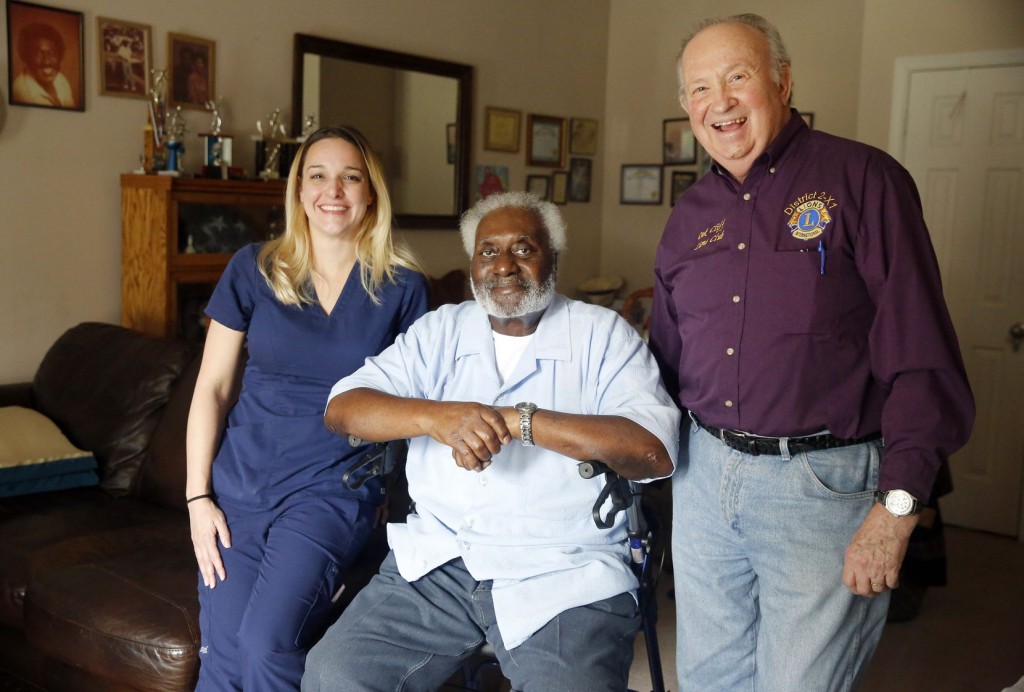 Meals on Wheels recipient George Kelley, 74, along with Abby Tupper and her father, Charlie, recalled the events of Dec. 17, when the Tuppers’ insistence on getting Kelley his lunch led to his rescue from a fall that left him stranded on the floor of his apartment.(Tom Fox / Staff Photographer)

The next thing Kelley remembers is the loud knock and Tupper’s jolly “Meals on Wheels” shout-out. “I kept saying, ‘I’m coming,’ ‘I’m trying’ and I tried to crawl again. But between my bad knee and being numb on the other side, I just couldn’t move.”

Once rescuers broke into the apartment and paramedics determined Kelley’s blood pressure was strong, he declined a trip to the hospital. He rejoiced in the sensation of sitting upright, even though his ribs, face and neck were badly bruised and he had ugly abrasions on his elbows and knees from his attempts to crawl.

I initially had a tough time getting the modest Tuppers to agree to talk about their role in this happy ending. “I didn’t feel like I had done anything special,” Charlie Tupper said as he, his daughter and Kelley took turns sharing the story.

But Kelley was having none of that. “He saved my life. They really need to build some more like him.”

Kelley has since invested in a medical alert device — although he sheepishly acknowledged that he tends to leave it on a nearby table rather than around his neck.

The Tuppers had their own message: It is so important to check on people — even if you have to be a nuisance. “Do what you can do to make sure a person is OK,” Charlie said.

“You can always apologize later if you’re a pest,” Kelley interjected. “I’m glad you guys came back.”