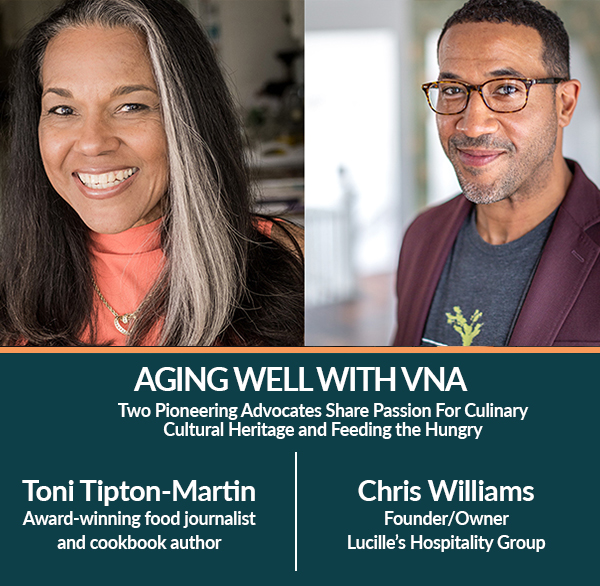 This podcast is a little different from our previous episodes. In this episode, we host two culinary greats to discuss their passion for food and feeding the hungry.

Toni Tipton-Martin is a culinary journalist, author and a pioneering advocate for the preservation and education of cultural heritage as it relates to cooking, food, and community. Also joining us is Chris Williams, a classically trained chef, restaurateur, and most recently, founder of the nonprofit organization, Lucile’s 1913 in Houston, whose mission is to feed those in need while addressing food insecurity and food waste. Both are headlining VNA’s upcoming signature fundraising events: Chris, at the Cocktails in the Kitchen event and Toni at our Celebrity Chef event in March 2022.

Throughout her career, Toni Tipton-Martin has used cultural heritage and cooking to build community. She is Editor in Chief of Cook’s Country by America’s Test Kitchen, a PBS television show host, a two-time James Beard Award winner for her books on African American cooking, and she recently was awarded the prestigious Julia Child Award, which is given to an individual (or team) who has made a profound and significant difference in the way America cooks, eats, and drinks.

Toni’s latest book, Jubilee: Recipes From Two Centuries of African American Cooking, brings to life 125 dishes from the African American cookbooks in her rare collection. Jubilee is a James Beard Award winner, earned the IACP (International Association of Culinary Professionals) Book of the Year Award, and was named one of the “Cookbooks You Need for 2020” by the New York Times.

In 2008, Toni founded the SANDE Youth Project, a 501c3 organization, whose mission was to increase wellness by celebrating cultural heritage, community role models and ancestral recipes. In 2021, the organization was re-named the Toni Tipton-Martin Foundation and its mission was re-engineered in an effort to help the next generation of aspiring women gain knowledge and skills in the areas of food and cultural heritage writing.

Chef Chris Williams is the Founder and Owner of Lucille’s Hospitality Group in Houston, Texas. Classically trained in French, Mediterranean, West Indian and East African cuisine, Chef Williams has made a name for himself serving up well-refined Southern food with international infusions at his restaurant Lucille’s—opened as a tribute to his great grandmother and culinary pioneer Lucille B. Smith.

Chef Williams has served as the lone culinary cultural ambassador for the USA for three years, advancing food diplomacy in destinations like Croatia, Slovenia, and Ukraine. He is also a member of the Southern Food Ways Alliance, an organization that documents, studies, and explores the diverse food cultures of the changing American South.

Williams’ most recent endeavor, Lucille’s 1913, is a nonprofit he founded. The organization mimics the ethos of his restaurant group and its namesake: functioning as a conscious community collective that is building a vertically integrated ecosystem to combat food insecurity and waste; creating training and employment opportunities in traditionally under-resourced neighborhoods; and empowering communities to discover a self-sustainable livelihood through food. To date, Chef Chris and the Lucille’s 1913 team have provided more than 350,000 meals to Houstonians in need since the start of the COVID-19 pandemic.

Williams is part of Restaurant Hospitality’s coveted 2021 Rising Star class and most recently was named to Bon Appetit’s inaugural “Heads of the Table” Awards List, which honors the trailblazing, community-building, future-making leaders changing the restaurant industry.